Well, the latest boner battle, the so-called "April Fool's Day Pranksters" found our highest voter turnout thus far.  Ken Olandt mopped the floor with Clayton Rohner (could be kinky if you're into that sort of thing), earning 14 votes to Rohner's lonely 1.  Civic duty is not dead, people.  Congrats to Mr. Olandt.  You've survived to boner battle another day!  Until your next battle Ken, stay alert, stay sexy and for all of us, find some tighter undies.  :)  But I must ask, where were the Rohner supporters?

Moving on -- our sixth battle takes us back into some Crystal Lake territory (see the first battle).  It won't be the last, so you may keep your "Jason" panties "un-bunched", if you don't see your favorite FRIDAY THE 13TH hunk in this current battle.

This bout is entitled, "Battle of the Friday the 13th Blondes" 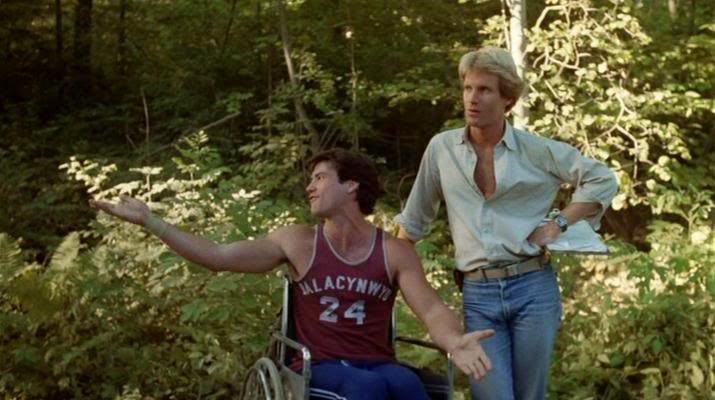 From FRIDAY THE 13TH PART 2, we're taking a look at John Furey, aka "Paul", the head counselor overseeing the film's group of ill-fated trainees.  First off...if you were my boss, I'd let you know immediately that any assistance you needed, in ANY area, would always be available.  You stressed out by that horny couple messing around in the wrong area of Crystal Lake?  I'll rub your shoulders, help you relax.  Your girlfriend a know-it-all psych major?  I can really get to those tense muscles if you remove your shirt.  Which, btw, NEVER HAPPENS in this film.  He's clearly got a hot bod, sporting plenty of blonde fur (always peeking out through the top of his shirt) on what have to be ample pecs and hard abs, and yet we never get a shot of that gorgeous flesh.  What gives?  Who's the director of this?  Steve Miner?  Galina (that's my secretary), could you get Steve Miner on the line for me?  I have a few choice words for him.  Thanks.

Furey had some bonus love from me as a kid, cuz he shared more than a passing resemblance to one of my childhood camp counselors (isn't that a weird coincidence?) whom I had a crush on, pre-puberty and pre-knowing who I was (a raging queen).  So that may give him a personal leg up.  Did someone say "leg up"?  All you had to do was ask.

Also, I feel obliged to point out that Furey's love interest in FRIDAY THE 13TH PART 2 was Amy Steel, and that her love interest in APRIL FOOL'S DAY was the last battle's winner, Ken Olandt.  Ms. Steel -- I mean this in the nicest possible way -- "you lucky bitch".

The photo I've chosen for Mr. Furey will illustrate many of his fine, hunky qualities.  The flowy blonde hair.  The open shirt -- meant to tantalize and tease all of the young gay viewers, showing just a touch of luscious chest hair...and if you need me to explain the other assets on display here, well -- then we have a problem.  I'll just spell it out for you -- that PACKAGE!  (just so it was prominently displayed, I made this picture super big).  And finally, I realize that the other dude in the photo is also hot, do-able and boner-battle-worthy -- and maybe, just maybe -- we will be taking a closer look at him in a later boner battle.  Anyway, there you have it -- I mean HIM.  John Furey. (btw, Furey is the dude on the right in the photo). 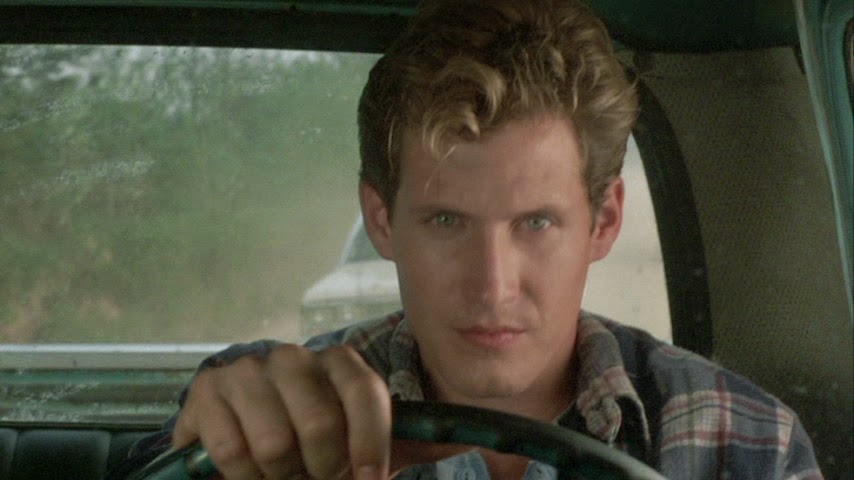 Our next blonde hottie shows up a few sequels later, when he battles our beloved Jason -- now in a fun zombie form.  Thom Mathews (also known to most of us as a two-time actor in the RETURN OF THE LIVING DEAD franchise) will be judged on his appearance in JASON LIVES: FRIDAY THE 13TH PART 6.  He is the third actor to portray one of Jason's ultimate nemeses, Tommy Jarvis.  And he's clearly the sexiest.  Those eyes.  Those dreamy blue eyes.  His pseudo-Superman curl, but in yummy-nummy blonde.  And those lips.  Dear Lord, those lips.  To Jennifer Cooke (aka Megan), his love interest in the film, how many takes did you have to do on the CPR scene?  Be honest.

I know we get some bicep reveal in RETURN OF THE LIVING DEAD, but in JASON LIVES, his body sadly remains a mystery, covered up by all of that heavy 80s denim.  You know, I get that it's a cold summer at Crystal Lake (didn't they film in like October?), but when swimming or hauling large rocks into a boat, destined for the water or prepping to finally destroy the monster-dude who killed your mother, traumatized you and your sister and put you in the nut-house -- shouldn't you be wearing appropriate clothes?  Something a little more revealing and flexible?  Help me out here, Megan -- when you got his supplies, you couldn't have found him a pair of trunks, tank-top, a SPEEDO for the inevitable visit to the waters of Crystal Lake?  No?  Well, I guess you were on a schedule.  I won't like it, but I'll allow it.

As hot as Thom Mathews is (he's on this list, isn't he?) I don't hesitate to cast my vote for John Furey.

On a side-note, I've chosen NOT to include Mathews' forerunner in the Tommy Jarvis sweepstakes -- in this entire contest.  While I recall that FRIDAY THE 13TH PART V: A NEW BEGINNING's lead (John Shepherd) was packing some serious muscles, that film never grabbed me (I think I've actually only seen it a couple of times in my life) or became one of my all-time faves in the Jason series.  And since we're basing so many of these contestants on my pre-pubescent and pubescent horror hotties nostalgia and "boners", I can't place him in the running.  You know, just in case anyone wants to make a big stink over his absence.  :)

So I'm not into censorship, but this first comment came from my husband. He likes to rattle cages. But to keep this little bout friendly and innocent (as we talk about boners and such), I've removed his comment. But his vote was for Thom Mathews. Am I a horrible person? Yes.

Thom Matthews.
I don't like blondes - so this was like choosing the lesser of two evils.
However, Matthews gives me odd Michael Bolton feels and I can't explain it, but I "like" that? 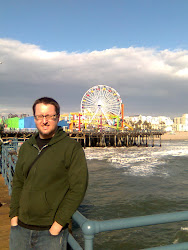